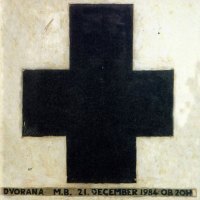 Live album of an early configuration of this mighty Slovene industrial band that – while recorded in 1984, didn’t see release until 1997. It’s also one – like their debut album on Ropot (Noise) – that featured the band’s appropriation of a Malevich cross as a logo rather than their name, due to a government ban on the name Laibach. Noisy and chaotic, most instrumentation consists of heavy martial drumming, metal percussion, electronic sirens and hunter’s horns. Milan Fras is the sole voice on this album (original frontman Tomaz Hostnik being long gone by this time) save for some audio recordings of the late, great Josip Broz Tito.
many songs follow the almost ritualistic form of Ti, Ki Izzivas (You, Who Are Challenging), with pounding drums and Fras’ bellowing, bottomless pit incantations. At times the proceedings approach free-jazz – save for the heavy, industrial pounding and metal-on-metal sturm und drang.