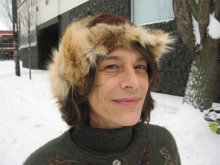 Cherie Blackfeather’s radio show – Vox Pop – not only asks you to say what you think; it also asks you to think about what you think about.
Her show is a free-roaming vox-populi that can take the listener down some unexpected roads.  She travels down the streets of Portland, Oregon and asks people some unexpected questions, usually along a given theme. The show is likely to shift gears, as her often conversational interview style is just as likely to illicit as many questions from her subjects as she asks them. One show – which was derailed slightly by the intrusive background soundtrack supplied by the barristos in the cafe it was held in – shifted focus temporarily into what was the nature of public space and when did noise interfere with it. It even sparked a thought-provoking conversation with the cafe workers that was non-confrontational and revealing of their perspective.
Because Cherie presents herself to interviewees sans agenda, she gets some really interesting candid conversations, and that’s rare in our highly subjective-laden mediascape.
Vox Pop is an engaging program that takes you on a stroll to someplace completely unexpected on every episode.